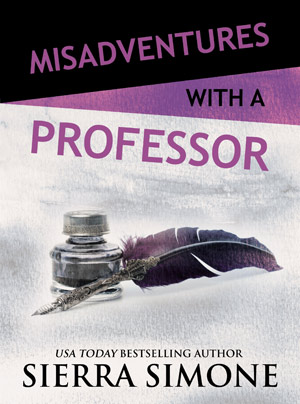 Misadventures with a Professor

Zandy Lynch never planned on going to grad school a virgin. So when her professor father finds her a job abroad as a research assistant the summer before she starts her master’s program, she sees her chance. She’s got one night in London to lose her V-card to a Mr. Darcy lookalike before she has to join some ancient professor in the country.

Oliver Graeme is not looking forward to having some American co-ed hovering around while he’s trying to work, but he owes her father the favor, and besides, his office is an untidy mess of uncatalogued research. He needs the help. Still, he decides to take the edge off his frustration while visiting a colleague in London, and winds up having the sexiest, sweetest night of his life with a stranger, who vanishes in the morning without a trace…

To Zandy’s shock when she arrives at Professor Graeme’s house a day later, the door isn’t opened by a fussy old scholar, but by the wild, passionate man she met in London. Cold and reserved by day, Oliver is ferociously greedy with her at night, and it’s not long before Zandy finds herself falling for both versions of him―the aloof professor and the generous, rough lover. The trouble is that summer only lasts so long, and Zandy already has a plane ticket waiting to take her home…

10 Filthy Stars 😳
Misadventures with a Professor is another AMAZING READ by Sierra Simone. She always has you on the edge of your seat chomping at the bit waiting for the next scene to take you under.. This is a fun little read. Zandy is finding herself out in the world, trying to venture out and become her version of "A WOMEN" she is looking for the ultimate "one-night stand" someone that she has researched about to take the one thing left to give, HER VIRGINITY!!! Zanchy the typical American Scholar and Oliver is a staunch English professor... his mindset on other things.. Like being alone and writing his books. When a chance encounter brings these two souls together, can Zandy share her wants and needs with this stranger and move on, Can Oliver accept the attraction and possessiveness he is forming for this attractive American Temptress? What will come of this chance for these two? This is another MUST READ by Sierra Simone. 10 Filthy Stats...
- Amie M.
Amazing read
The Professor is a amazing, dark and twisted read Nicholas’s and Phoebe’s story is very unique and diving into that you do have to be prepared for some disturbing scenes. Nicholas is not only Phoebe’s professor but also her stalker and from his point of view he’s only doing that to protect her. But then stalking becomes much more when he’s starting to blackmail her and there is no way out for her because the living circumstances she’s dealing with. This story will take you for a ride and I would definitely recommend it.
- Andrea
She did it again!
I have picked up a couple of the “Misadventures” series books; mostly because their titles sounded appealing and/or intriguing to me. However; this “Misadventures” title sounded pretty much like a run of the mill trope until I spotted the author’s name at the bottom. Sierra Simone. OMG! What I wouldn’t give to see what Ms. Simone has done with a staid and stuck-up professor!! And, “GOOD GRIEF!” Sierra did it again! She struck gold. This story was incredible!! So NOT what I was expecting, but perfection nonetheless. If you were looking to find something better than the average student/teacher romance - - look no further! Sierra does it with skill and aplomb, plus it’s one freakin’ HAWT story. Thank you, Miss Sierra. Your check is in the mail!
- CDBall