In our last Hidden Pleasures, “The Books Our Grandmothers Read but Didn’t Admit to Until Now,” we looked at the decades up to the year 1949, in Part II, we are heading for the 1950s. The days of Bobby Socks, Poodle Skirts and Rock ’n’ Roll. Going with a boy was still a serious thing, kissing on a first date was a huge decision, and our Nice Young Ladies—known hereafter as NYLs—still didn’t have sex before marriage or talk about it outside of a close friend or sister. Mother’s might discuss it, but probably not, and if our Nice Young Ladies were going to read anything racier than Nancy Drew or Beverly Cleary’s Fifteen or The Tippy Parish Series by Janet Lambert, they’d better know some sleight of hand or keep a cache in their room.

Here are the Top 10 Hidden Pleasures of the 1950s. Again, these are not by popularity but by publication. I have included how some of these books were accessed and how some were hidden just because of the sheer ingenuity required.

This “Tell-All Confession” magazine had been around since 1919, but during the 1950s, its focused changed. Going from black-and-white to including two-page color fashion spreads increased its popularity with the younger set. The editors also began to focus each month’s “Confession” on a teenage girl who had made “poor choices.” This usually included a hasty marriage, hateful in-laws, brutally primitive living situations, abuse or neglectful spouses, and multiple pregnancies. Side stories might include premarital sex, out-of-wedlock pregnancy, drugs, and drinking, resulting in being turned away from a good and loving home. Life for True Confession Girls was not all poodle skirts and monogrammed sweaters. Our NYLs often snagged these from older sisters or older classmates and passed them on or passed them around slumber parties.

NYLs were eager to get a hold of a copy of Salinger’s Catcher to read all about Holden Caulfield, bad boy extraordinaire. He is rebellious, snotty, sarcastic, and crude. All the things NYLs would not have brought home to mom and dad back then, but they loved to read about him. One NYL read this out in the open…sort of… Her father did reviews for a local paper and had a copy in his office. She read the book while babysitting her siblings when he would take her mother out for dinner on Friday nights. She then invited a friend over who also read the book when her parents were out. My, my, no wonder they always seemed to know when we were up to something!

8. 1953 The Kinsey Reports by Alfred Kinsey and Associates

NYLs loved getting their hands on this book and found myriad ways to hide it. These included right in the back of dear old dad’s old tax-return drawer, under their mother’s old maternity tops, or in the bottom of her hope chest. Kinsey covered such topics as heterosexuality, homosexuality, and fetishes. Mostly obtained from college-age sisters, the books were considered a real find, even if the lingo was mainly medical and scientific in nature. The taboo subject matter was worth the risk.

Desclos claimed the novel started as a series of letters to her lover Jean Paulhan, an admirer of the Marquis de Sade. The Story of O was a tale of love, dominance, and total submission, the Fifty Shades of its day. Subject matter included brandings, labial piercings, whippings, and multiple partners. The descriptions of acts in the book were quite explicit, and any NYL caught with it could be certain of more than a mere “talking-to.” Some NYLs purloined this from single aunties or single friends of their mothers.

British English teacher comes to America and becomes smitten with nubile twelve-year-old. Why any self-respecting parent wouldn’t want their impressionable daughter to read this one is beyond me. Humbert Humbert takes every opportunity to get close to Delores, the twelve-year-old in question, including kidnapping her. The reader is privy to his desires and fantasies. Some NYLs got this one not from their mothers or sisters but rather from fathers, brothers, or uncles. One hid a copy she had obtained in plain sight by putting a cover of Moby Dick over it. This is why you could never get away with anything around your Gran.

If you think writing is for wimps, think again. Metalious suffered all kinds of harassment for this book. She spent ten long years writing it. She knew the people in this book, and when it was published, even though it was fictionalized, they knew themselves. Set pre-WWII, it revolves around three women and covered several taboo topics for its time: adultery, incest, out-of-wedlock pregnancy, pregnancy, abortion, and murder. It received very few good reviews, but that was hardly an impediment for Grace. Peyton Place sold one hundred thousand copies in its first month—this at a time when the average bestseller was considered three to four thousand. One NYL had a pretty hip mom. “She laid it on the telephone table in the hall. I picked it up and read it and quietly put it back. She put it away, I don’t know where. We never ever spoke of it.” Other NYLs weren’t so lucky, resorting to far more nefarious ways to get it, including shoplifting it from the local five and dime.

4. 1957 Mandingo by Kyle Onstott (also referred to as The Mandingo Books)

Onstott’s fictional historical drama was based on a theory that female slaves who bore hardy children were of more worth than all the male slaves no matter how much they worked. It is set on an Alabama Plantation in 1832. At Falconhurst Plantation, Mede is a Mandingo slave whose sole job is to impregnate female slaves to bear hardy children. According to our NYLs, the impregnation scenes were pretty explicit and so the books were not to be seen. Hidden in purses, curler bags, and between crinolines, these books were considered a real catch.

The writing team claims that it started as a series of letters between the two, and Candy became a running joke at the end of each letter. They later decided to turn her into a book. She was a beautiful, well endowed, innocent girl who got herself into all sorts of oddly comic sexual situations due to being blissfully ignorant of her effect on men. Explicit scenes, exotic locales, and oddball characters made this book the desire of many NYLs and, once in hand, was discretely passed among all of one’s friends. This tale was hidden with book covers, sliced into portions, and read at slumber parties.

Nice Young Ladies, mainly in the British Isles, told me this one was often stolen or BWOP (borrowed without permission) from their mums, aunties, or older female cousins. Set in 1958 in fictional Napoli, a rundown area in London’s West End, it is a community of Caribbean and English people always on the edge of destruction. The main characters are mostly teenagers. But nearly all are pimps, prostitutes, drug dealers, or addicts. Those of you with English Nans or Grans, know they had to work hard to keep this one out of sight.

NYLs were scurrying this year to get a copy of this among certain communities. The adultery theme and secret tryst certainly made this popular among young ladies, but their parents…not so much. One NYL said she sneaked it home in her purse from a ladies house whom she ran errands for, and she hid it for nearly six months while all her friends read it. Nearly twenty-five women I surveyed said it was definitely a book to be hidden. One stated her copy, which she had gotten at a great-aunt’s home, was confiscated, and she never found it again.

I hope you’ve enjoyed this look back and will consider revisiting what your Gran was reading when she was a girl. It might shock you! Next time we will look at the 1960s. 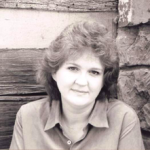 Susan Campton is a retired Psychiatric Social Worker, who is now a full time Secretary for Book Review Blogger Drakon T. Longwitten, The Book Dragon and part-time Freelance Writer under the name J.V. Montgomery. She is also working on a book based on her experiences during her time in Social Work in Appalachia.  Tales from the Book Dragon can see be seen here:  www.talesfromthebookdragon.wordpress.com

Loving this blog….it’s so intriguing! Thank you!