Novel in my bag: Choose Me by Heidi McLaughlin

Best of the trip: The majestic Grand Teton mountains was by far and away the absolute favorite of any place I’ve ever been. My God, the mountains were beautiful. Getting to hike them was even more amazing. We also went during off season so there wasn’t a lot of people. All the sights we saw will forever be ingrained in my mind. Yellowstone National Park was also a highlight of the trip, but honestly, it didn’t compare to the Grand Tetons. However, it was pretty awesome seeing Old Faithful erupt.

Worst of the trip: The only thing bad about it was I had a case of altitude sickness. There was a whole day where I stayed in bed. For my husband, he ended up having an allergic reaction to the detergent used in the bed sheets at one of the hotels we stayed at. There were hives all over his body.

Foodie Highlights: Bison! This trip was the first time I’d ever tried a Bison burger. It was so yummy! For breakfast, our favorite place was The Bunnery. The cinnamon rolls were to die for, and I loved their pancakes. We walked there every morning. We also walked to the Snake River Grill a few times for their local beers. Of course, that was my husband’s favorite spot. 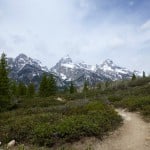 First off, I have to say that out of the gazillion places I’ve been to, Wyoming takes the cake. Don’t get me wrong, I love tropical islands and beaches, but nothing beats the mountains for me, especially the Grand Tetons. The second we landed at the airport, I was mesmerized. It was the first week of May, but there was still snow on the mountaintops. One morning, it actually snowed on us as we walked to breakfast. Being from North Carolina, we never see snow in May.

The main goal of our family trip was to see the sights of the Grand Teton National Park and Yellowstone National Park, but it ended up being so much more than that. Our first adventure led us to the Grand Teton National Park. The trails took us to some of the most beautiful places I’d ever seen. I still remember being on the dirt path out in the sun, and then all of a sudden, underneath the protection of the trees, the trails were hidden under multiple feet of snow. We were in short sleeves, hiking through it all. I’m surprised I didn’t break a leg. One minute, I’d be on top of the snow, and the next I’d take a step and fall right through. My kids got a good laugh every time I fell over. But of course, it wouldn’t be a Dover family vacation without some craziness. When it comes to hiking, my husband loves to venture off the beaten path. With all the snow, it was hard to tell where the path was at times. We ended up veering off into the woods into some very difficult hiking. I’m talking steep hills, and lots of animal poop. Lucky for us, we found our way back. I’d hate to think of what would’ve happened if we really got lost in the Wyoming wilderness. What really scared me though was when we decided to hike another trail and we saw bear poop everywhere. We had no protection whatsoever which was really really really stupid. I was terrified the entire time. When my husband and I got home from our vacation, it dawned on us how idiotic we actually were. Things could’ve really turned out bad for us. Thankfully, it all went well and we got some amazing pictures.

The best and most scenic trail in the Grand Tetons was definitely Hidden Falls. We hiked a total of ten miles that day. It was definitely worth the energy and time. We almost gave up on finding the waterfall because we kept hiking and hiking and hiking. Then, we came upon a bridge, where we had to climb up onto what had to have been five feet of snow. It was the craziest thing I’d ever seen. My hubby had to help me up onto it so we could continue onto the trail that we obviously couldn’t see. As we walked carefully across the snow, we could see the tip top of the fence posts sticking up. That’s how deep the snow was. I prayed the entire time that I didn’t fall into a hole because I highly doubted I would’ve been able to get out. Once we reached Hidden Falls, it was absolutely breathtaking. I’ve written about this trail multiple times in my books, including my next release, LOVE AGAIN. I love using Wyoming as my setting. If you’ve ever seen the cover of my novel, Roped In, the background is a picture my husband took while on that first hike in the Grand Tetons. It’s my favorite book cover. 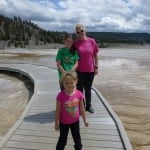 Like I said before, it wouldn’t be a Dover vacation without some craziness. This leads me to the time we spent in Yellowstone. With it being off season, the south gate to Yellowstone was closed from the Jackson Hole side. We didn’t realize that when I booked the trip so we ended up driving from Jackson Hole up through Idaho to Montana to get to the West entrance. It was a cool road trip. The roads in Idaho were like a rollercoaster. Up and down, up and down. We only spent two days in Yellowstone, and got to see Old Faithful erupt. There were a lot more tourists there than in the Grand Teton National Park. That was why we decided to head back to Jackson Hole and spend the remainder of our trip hiking. It was a good thing too because I was pretty sure the hotel staff at the place we stayed at in Montana was ready for us to leave. I kind of made a huge mess, and I still feel bad about it today. We were in the lobby where they served a hot breakfast. My husband and girls all had their food, and had sat down at one of the tables. I was craving a waffle so I went to the batter dispenser to get me a cup of batter to make me one. As soon as I pulled the lever, it broke off and warm waffle batter oozed out with torrential force all over me and the floor. It kept coming so I shouted for my husband to come help me. I looked over at him, and both he and my girls were at the table just laughing at me. I was standing there, covered in waffle batter, and it was still shooting out at me. There were tons of other people too, just staring. Once the hotel staff realized what was happening, they ran in and got covered in waffle batter as well, but not before giving me the evil looks. Needless to say, I hurried out of the room, while my husband and kids laughed the entire time. In my novel, Roped In, I put my main character through the same torment. 😊 To this day, I still stay away from the waffle batter dispensers at hotels.

All in all, Wyoming was the perfect trip. It gave me the inspiration for so many of my novels. Every vacation I’ve been on since, I always compare it to this trip. Nothing has beat it so far.

Author Bio
New York Times and USA Today bestselling author L. P. Dover is a southern belle living in North Carolina with her husband and two beautiful girls. Before she began her literary journey she worked in periodontics, enjoying the wonderment of dental surgeries.

She loves to write, but she also loves to play golf, go on mountain hikes, and has a passion for singing. Her youngest daughter, who she’s also written a children’s book with, expects a concert each and every night before bedtime, usually Christmas carols.

Dover has written countless novels in several different genres, including a children’s book with her youngest daughter, but her favorite to write is romantic suspense. However, she has found a new passion in romantic comedy, especially involving sexy golfers. Who knew the sport could be so dirty and fun to write about. 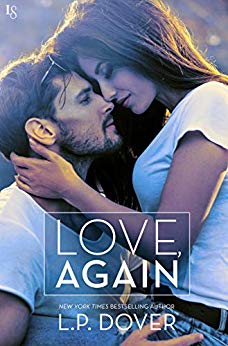 Aubrey Reynolds is a small-town girl who’s made it big.
A successful Hollywood director, Aubrey doesn’t have time to linger on what could have been.
But when a routine blood test comes back with a false positive, she decides to take some time off to do the things she’s always wanted to do: taste the famous chocolate chip cookies at the Minnesota State Fair, hike the Grand Teton National Park, scuba dive in the Caribbean.
But after Aubrey admits to herself what she’s really missing, she heads back home to Dusty Valley, Oklahoma . . . and the man she left behind.

Cole Haywood is a small-town fireman and that’s just fine with him.
Sure, when the love of his life left their hometown to chase her dreams he was heartbroken and—he’ll admit—damn mad.
But Cole would have never forgiven himself if he had held Aubrey back from success.
So the last thing he expects after all these years is to walk into his favorite bar one night and find the girl he’s always loved—there—looking for him.
Maybe now’s the time to make his dreams come true.