Novel in my bag: The Lazarus Project by Aleksandar Hemon

Best of the trip: After a long day of hiking, sitting down on Nice’s pebble beach to have a pizza, a few glasses of wine, and a swim while the sun went down. It was an almost entirely local crowd having drinks, listening to music, and going for a midnight swim—I love stumbling on the kinds of gatherings that you don’t read about on TripAdvisor, but really define a community.

Worst of the trip: Probably because of the temperature change, I got a head cold in Iceland and hopelessly struggled to find the right medicine. There’s half a shelf of Icelandic-labeled pills, tablets, and liquids in my bathroom that I purchased in the quest to feel better. Nothing worked (apart from the steam of the Blue Lagoon) and I ended up miserable on the flight home.

Foodie Highlights: I’m a sucker for the precision of a multi-course French meal; we had the most delicious and aesthetically pleasing in Nice, which culminated with a roasted lamb shank. We were in a narrow alley across from the Mediterranean, there was an accordion player, laundry hung on lines above us, and there was a multi-course wine pairing. Need I say more? 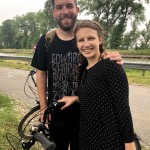 I intended to start by claiming that my favorite part of a trip is the planning phase. Collecting all the guidebooks, zooming in and out on Google Maps, exploring on Tripadvisor—crafting the perfect itinerary. I take great pride in finally getting to unveil the precision of my itinerary to the travel group. But, much as I love the process, it’s not really my favorite; I just like anticipation. The details that don’t start out on the itinerary are the ones that leave the biggest impression and make their way into my writing—the people, situations, and problems I didn’t foresee meeting, getting into, and having. Those details have to be handwritten onto itineraries or jotted down in my phone’s notes app so I don’t forget them amidst the stimulation of experience or fog of food and drink. The unexpected is what I return to for a good story, and I can’t wait to mine my recent trip to Western Europe. 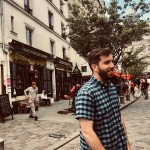 Our backpacking trip spanned Amsterdam, Belgium, Paris, the French Riviera, Monaco, Barcelona, and Iceland. I mix cities and countries because sometimes we stayed in a city and sometimes we ventured out. Speaking of “we,” there were 7 of us, a mixture of couples and singles who’ve been friends since college, so there were a lot of interests and passions to balance in my itinerary planning. I envisioned the illuminated pinnacle of the Louvre, Iceland’s geothermal springs, Amsterdam’s canals, and Gaudi’s architecture. French food, Belgian beer, sangria, and frites. All the frites. And those things were there—and they were beautiful and interesting and everything they’re supposed to be—I just wouldn’t write much about them. 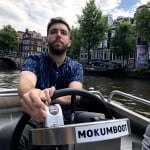 What stands out instead, are the problems we got into. In Amsterdam, I rented a canal boat to have a picnic and wine on the water to celebrate my wife, Maria’s, birthday. We ended up panting, wide-eyed, and very much docked a few kilometers away after I nearly crashed into a boat of German bachelor partiers. And then a tour boat. Eventually, we got back on the open water to the cheers and jibes of locals along the banks. We later took a wrong turn on a Belgian bike ride from Bruges to the coast, and our leisurely ride became a 50+ mile trek through untouristed country towns. After celebrating the World Cup too hard, we broke the couch in our Airbnb and had to replace it. In Iceland we stayed up all night to see the sunset, only to conclude at 5am that it wasn’t going to get dark. In Monaco we experienced a downpour, so we ended up in Italy for lunch (I know, poor us). We missed dinner times, but ended up with kebabs. On the beach in Barcelona we bought a round of mojitos that didn’t have a single drop of alcohol in them from a prowling vendor, which only pushed us into a bar where they had the best sangria we tasted.

There were notable characters, too. We interacted with a series of bewildering hostelmates: one who took us to his favorite dance club but refused to get in a photo or tell us where he was from, another would only respond with “I’ll stay here” no matter if we invited him out or asked if he’d like the lights left on. A man in Iceland chased us down to explain why authoritarianism was the right choice. One Airbnb host took me into the kitchen of no less than 4 local restaurants in Nice so I could shake hands with the chefs. A Romanian man who kept inexplicably taking selfies with me in the Reykjavik airport. 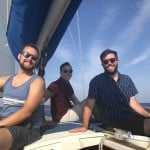 Many things went right. We rented a sailboat and spent a day swimming and sipping Cava on the Mediterranean. We got to drive the golden circle in a spa-filled, meditative end to a month of exploring. My wife and I got to celebrate our wedding anniversary with our closest friends over dinner inside the Eiffel Tower. But many parts didn’t go as planned either. That same anniversary night, we showed up to the Eiffel Tower with a few bottles of wine, which we weren’t allowed to bring in, and opted to hide the wine inside the lining of a public garbage can. But, we returned after dinner and it was still there. I’ve never had a better drink than that trash wine, and those unexpected moments are the ones I tell and write.

Author Bio
Zack Hacker lives in Cincinnati, Ohio, where he teaches English and Creative Writing. He is a graduate of Mount Saint Joseph University and received his M.A. in English from Case Western Reserve University. He lives with his wife and three cats, watches too much reality TV, and is always planning future travel experiences for himself and students. 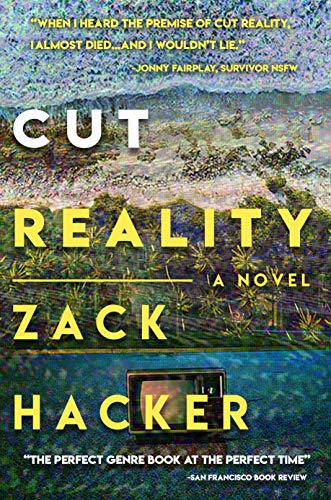 When death washes ashore on reality TV, who’s to blame? And what’s real?

“Intelligently conceived and well-executed…A mystery that thoughtfully reflects on the hazy line between suspicion and reckless mania.” – Kirkus Reviews

Join Jason Debord as he seeks clarity following the death of a reality TV co-star and ends up uncovering criminal conspiracy.

When Jason returned home from competing on Beached he’d lost weight, couldn’t sleep, and felt more alone than ever. But, he expected those changes. Jason had no way to predict that one of his fellow competitors would fling himself from a cliff. Unless he didn’t.

Jason can’t believe it, but the network broadcasts the alleged suicide to the world, so he pushes forward in his own amateur investigation. Met with resistance from the cast and crew, he persists only through the support of his developing romance with Blake, a psychologist who observes alarming similarities between her patient and her partner.

Events in Cut Reality have a variety of interpretations. While under the watchful eye of the public, Jason has to decide: is what he uncovers too coincidental to be true, or so hard to accept because it’s his new reality.

free vegan dating service for over 65

how to buy sildenafil online usa

Guest
Get A Loan

need a loan with bad credit

Guest
Get A Loan