Novel in my bag: The Cold Dish, by Craig Johnson

Best of the trip: Moose, moose everywhere. Mountains higher than Yellowstone, wildlife that's really wild, exciting history, and no crowds! The real West. For the spiritually-inclined, don’t miss The Medicine Wheel. For those that just have to see the Jackson Hole and Yellowstone National Park area, head west. You can’t miss them.

Worst of the trip: Getting lost in the mountains. Almost ran out of gas. Dirt roads. No cell signal or signs. Cold at night. No services/food. Be prepared for anything, anytime! 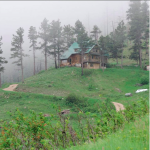 During summer book touring, I convinced my Virgin Islands-native husband Eric that we should “swing by” Wyoming, my childhood home state. Trust me when I tell you there’s no such thing as swinging by any location in a sparsely populated, rugged state like Wyoming, but I managed to keep that from him long enough that we booked a gig there, thirteen hours from any other event on our trip. In July, of course, so he wouldn’t get a premature taste of the wild, windy, snowy, and often frigid weather. 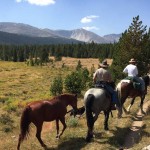 Driving in, the night air was cool and smelled of the creek-hugging Russian Olive trees. We took our RV up into the Bighorns and immediately came upon a real, old-fashioned, high-country cattle drive. We encountered seven moose in one day. Rode our mountain bikes down Crazy Woman Canyon through scenery and legend memorialized by Robert Redford in Jeremiah Johnson. Licked ice cream cones walking through the quaint Old West of downtown Sheridan. Padded Eric’s closet with too many Surf Wyoming t-shirts, if there’s such a thing as too many of those. I admired the cowboy vibe and look, which he didn’t fail to notice.

By the end of our trip, we’d discovered a rustic, off-the-grid log bed and breakfast on the face of the mountains. For sale. It was cabin-lust at first sight.

“I see myself writing mysteries here,” I told him. Place—where I write, and where I write about—fires my muse.

“We already have a house in Texas,” he told me.

He groaned, a goner already. 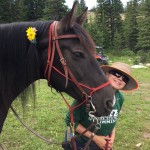 Two months later, “swinging by” Sheridan became a part-time life, complete with a husband in boots and jeans, with a big truck and big horse, because he knows how to give me what I want. I wrote three novels, a novella, and a short story there our first year in the cabin. From our deck, we watch cowboys drive herds of horses and cattle up the mountains, bald eagles swoop on updrafts over our roof, deer, antelope, moose, and the occasional elk play, and snow drift in crenulated towers over our long, winding driveway. We hold writers and creative retreats there, and we even rent it out (it’s really big!) on Air BnB. Snowheresville, we dubbed it.

And Eric loves it as much or more than I do, but he has said he can’t let me pick our book tour stops anymore, because we already have enough houses.

Author Bio
I’m Pamela Fagan Hutchins, and I like big butts and I cannot lie: horse butts that is. As in draft cross horses, which I ride with my hunky husband way up in the frozen north of Snowheresville, WY and deep in the heart of Nowheresville, TX. I am a wannabe barrel racer afraid of going fast, an eater of ribeye, a fangirl podcaster, and author of the funny, romantic USA Today-bestselling and Silver Falchion Best Mystery-winning What Doesn’t Kill You series. 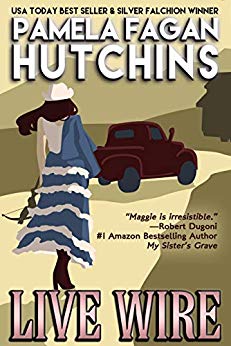 Washed-up alt-country-rocker-turned-junker Maggie Killian is pulled to Wyoming by an irresistible force . . . former bull rider Hank Sibley, the man who broke her heart fifteen years before. When she unexpectedly meets his Sunday school-teaching-girlfriend at a saloon, Maggie seeks liquor-fueled oblivion between the sheets of a younger man’s bed. But after her beloved vintage truck breaks down and leaves her stranded in the Cowboy State, she learns her hookup died minutes after leaving their rendezvous. Suddenly surrounded by men with questionable motives, Maggie searches for the murderer while fighting the electricity between herself and her old beau and her new penchant for local whiskey.

When the police zero in on Maggie despite a disturbing series of break-ins at her guest cabin, she realizes she’s got no one to rely on but herself. To keep herself happily in bars instead of behind them, she must stop the killer before the cops realize the man she really suspects is a jealous, angry Hank.